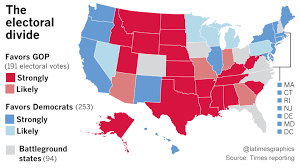 An Associated Press analysis reveals that in 376 counties with the highest number of new cases per capita, the overwhelming majority — 93% of those counties — went for Trump, a rate above other less severely hit areas.

Most were rural counties in Montana, the Dakotas, Nebraska, Kansas, Iowa and Wisconsin — the kinds of areas that often have lower rates of adherence to social distancing, mask-wearing and other public health measures, and have been a focal point for much of the latest surge in cases.

Taking note of the contrast, state health officials are pausing for a moment of introspection. Even as they worry about rising numbers of hospitalizations and deaths, they hope to reframe their messages and aim for a reset on public sentiment now that the election is over.

“Public health officials need to step back, listen to and understand the people who aren’t taking the same stance” on mask-wearing and other control measures, said Dr. Marcus Plescia of the Association of State and Territorial Health Officials.

The electoral divide comes amid an explosion in cases and hospitalizations in the U.S. and globally.

The U.S. broke another record in the 7-day rolling average for daily new cases, hitting nearly 90,000. The tally for new cases Thursday was on track for another day above 100,000, with massive numbers reported all around the country, including a combined nearly 25,000 in Texas, Illinois and Florida. Iowa and Indiana each reported more than 4,000 cases as well.

The AP’s analysis was limited to counties in which at least 95% of precincts had reported results, and grouped counties into six categories based on the rates of COVID-19 cases they’d experienced per 100,000 residents.

Polling, too, shows voters who split on Republican Trump vs. Democrat Joe Biden differed on whether the pandemic is under control. Thirty-six percent of Trump voters described the pandemic as completely or mostly under control, and another 47% said it was somewhat under control, according to AP VoteCast, a nationwide survey of more than 110,000 voters conducted for the AP by NORC at the University of Chicago. Meanwhile, 82% of Biden voters said the pandemic is not at all under control.

Trump voters interviewed by AP reporters said they value individual freedom and believed the president was doing as well as anyone could in response to the coronavirus. to reads more, click here