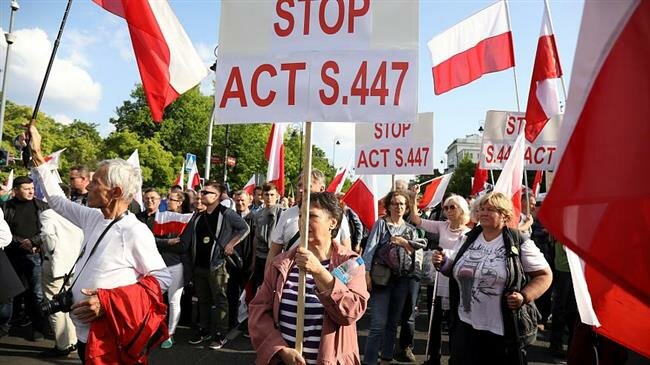 Poles hold ‘largest’ protest against US pressure over Jews

Thousands of Poles have marched on the US Embassy in Warsaw to protest American pressure on Poland to compensate Jews whose families allegedly lost property during World War II.

The protest held on Saturday was described as one of the largest street demonstrations in recent times, attracting a wide spectrum of groups including far-rights and their supporters.

Last year, President Donald Trump signed into law the Justice for Uncompensated Survivors Today Act, also known as S. 447, which requires restitution of property stolen in the Holocaust in dozens of countries.

US State Department’s new envoy on anti-Semitism, Elan Carr, was in Warsaw this past week, telling leaders and media that Washington was urging Poland to act on the issue.

Polish protesters in Native American headdress Saturday held a banner with a message pointing to US double standards: “USA, Practice 447 at home. Return stolen lands to the descendants of native tribes.” to read more, click here