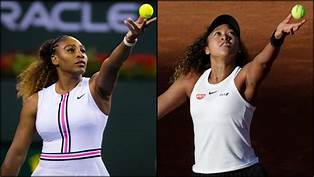 Serena Williams and Naomi Osaka (likely named after Naomi Campbell) will face off for the third time in the semifinals of the 2021 Australian Open.

This match will likely be one of the most watched sporting event worldwide this year. Naomi has a 2 to 1 edge in their previous matchups.

Serena is seeking her 24th major championship. This would tie her with Margaret Court who reached that number at a time when only White women were allowed to play professional tennis. Many experts say that Serena is already the greatest of all time (GOAT) in women’s tennis.  This one African American family has produced more Grands Slam championships than the entire continent of Asia, and most countries in Europe.  Had she not been playing her sister Venus; Serena would have more than 30 Grand Slam wins.

Naomi Osaka is one of the most talented players on the circuit. She is the top earning female athlete by far in the world; Although she has roots in the African Americas & Haiti.

Although she spent most of her early years in the US, the decision was made to represent Japan as a professional. There, she would not have to compete with the likes of Serena, Venus and Sloan Stevens for public adoration. It has paid off with millions of endorsement dollars from Asian companies.

Naomi is proud of her African roots. Here frizzy natural ponytail is her trademark. When an ad agency showed an image of her with photoshopped white skin, she made it clear that she wanted no part of that. The company quickly took it down. Naomi has endeared herself with African American youth with her strong support of Black Lives Matter.

All in all, the fascinating lives of these two “Sistas” bring more to the show than great tennis.